Discharge in the Rio Colonia demonstrates a similar pattern to that recorded in other sub-catchments. Elevated discharge being recorded for the months January to April, followed by a gradual diminution until the rains start in December. The site has only been sampled November, the dry season, as such discharge has always been very low.

At just over 2000m asl the DO readings at RT05A are similar to other tributaries and fall within the range to be expected for both July and November data sets. Again, the increased elevation and diurnal fluctuations in temperature in narrow, sheltered sections of the valley will produce fluctuations in maximum absolute oxygen capacity and, in consequence, percentage saturation. This then fluctuates with that rhythm accordingly. The DO levels do range from 5.2-7.3 mg/l, which is rather variable. It perhaps reflects nothing more than the complex interaction between temperature and atmospheric pressure. There is some indication of eutrophication in the stream which may be reducing available oxygen. However, along with significant fluctuations in discharge this site will present much aquatic life with challenges.

The conductivity readings at this site (267-321 µS/cm) are very low, as expected at this elevation.

An average pH reading of nearly 9.0 is on the high side compared to the pH values recorded in the main valley. At these levels the alkalinity of the river is suitable for aquatic life but could start to impact on the reproductive success of many aquatic vertebrates.

Site RT05A is located just above a broad outwash fan. This being produced by earlier flooding episodes in the upper catchment, probably associated with the cyclical ENSO. It is distant from any settlement, with most urban areas located upslope. This narrow side valley drains one of the larger sub-catchments that lie on the south bank. A sub-catchment that is largely inaccessible with only poor roads and communications.

At this sample point the channel is flowing across a broad outwash fan in a channel choked with larger rocks and boulders. Lands in the area are cultivated and require irrigation. This is taken from higher up the valley into canals which track valleys sides along a contour. Waters here are used to develop the flatter and more open areas for more intensive production. Agricultural demand both here and in the headwater communities means that the Rio Colonia has little or no water in it for much of the year. Production is for the valley communities and not purely subsistence. Again, we have noted the use of pesticides, which is also a concern for much the same reasons as expressed earlier.

Along the channel edges vegetation is largely anthropic in origin. There being remnant and early successional acacia, clumps of river cane and smaller willows. The fauna and flora is much the same as other sites in the sub-tropics. 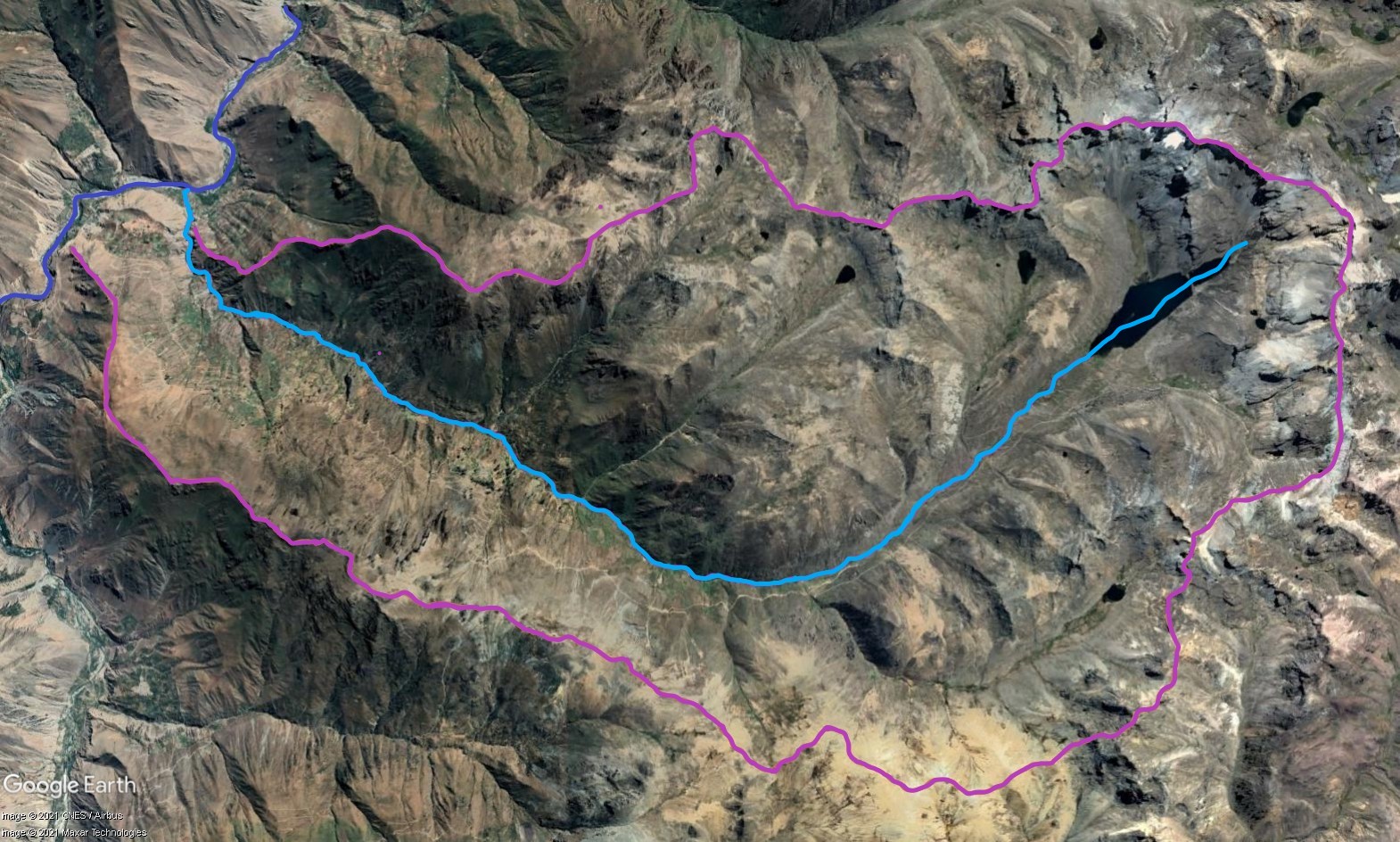 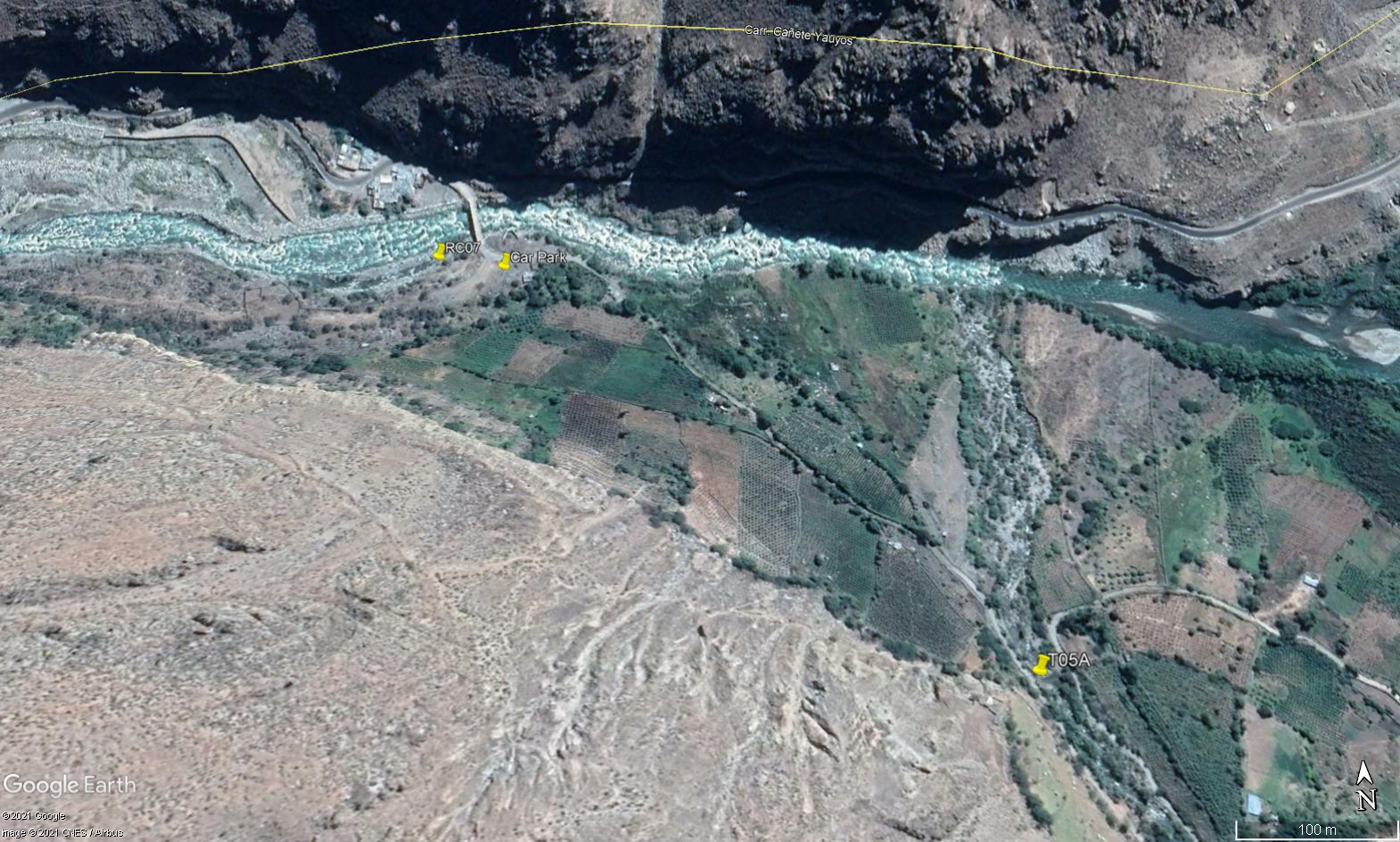 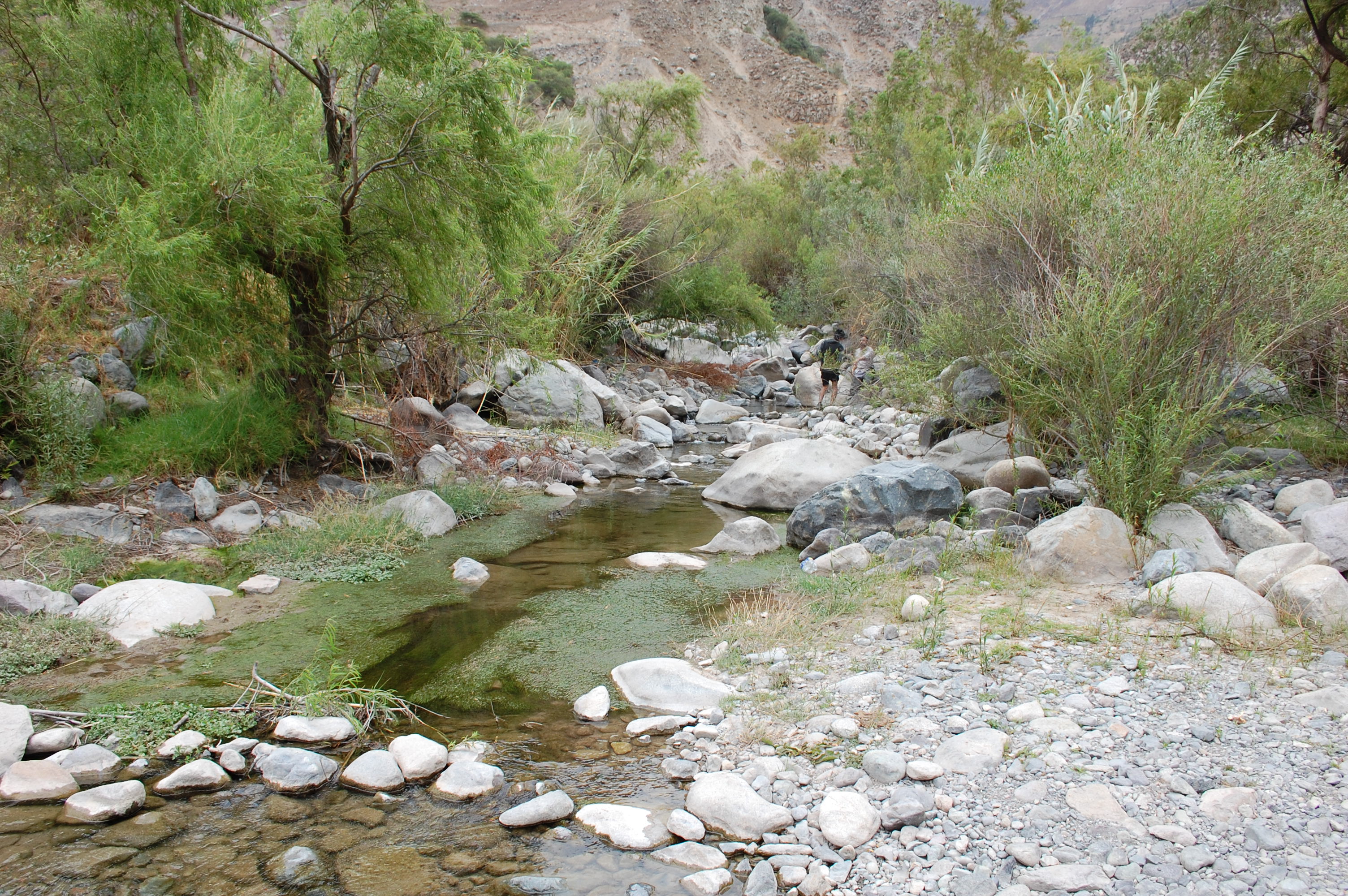 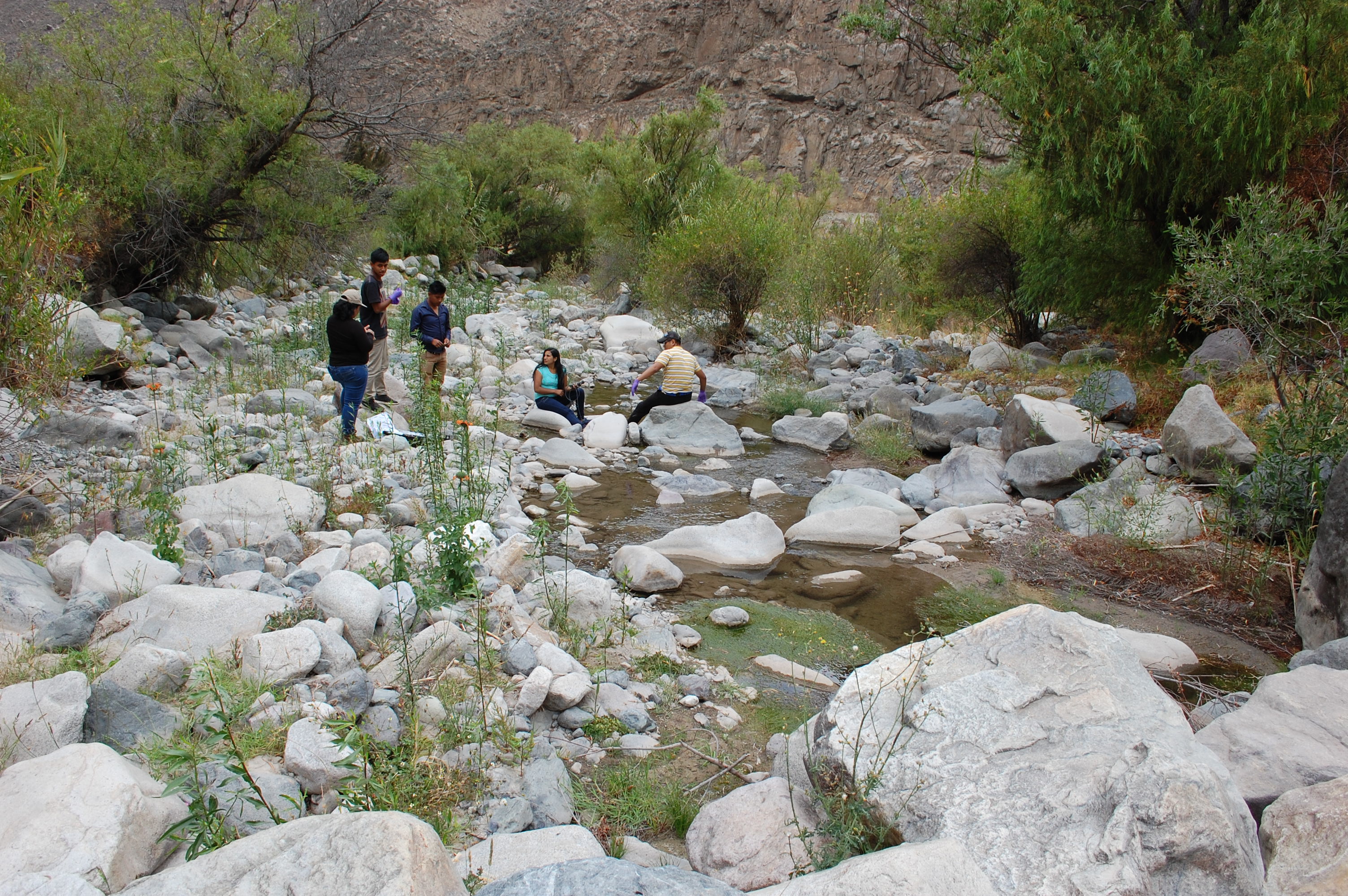 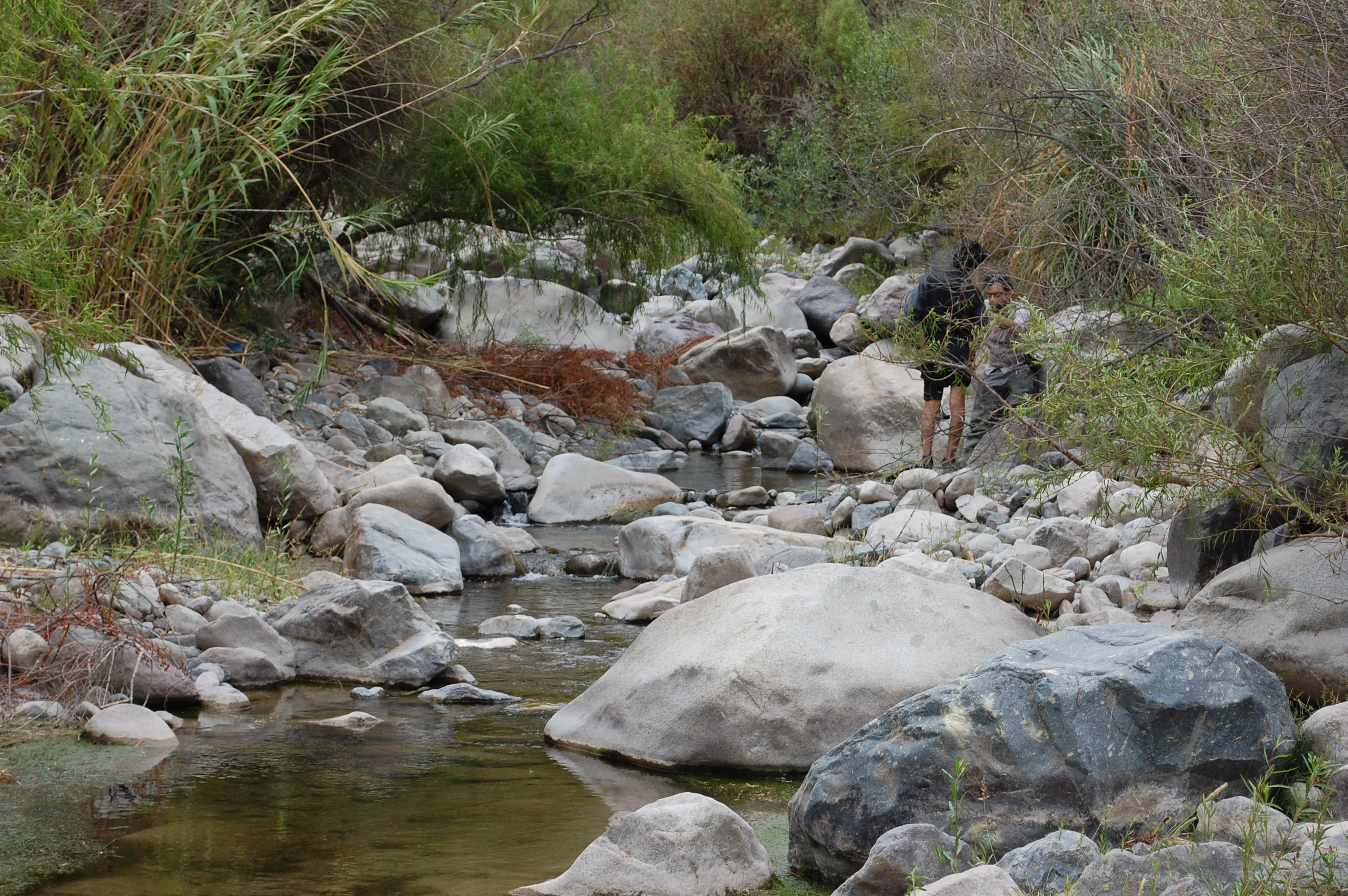